Scenarios for the outcomes of Covid-19 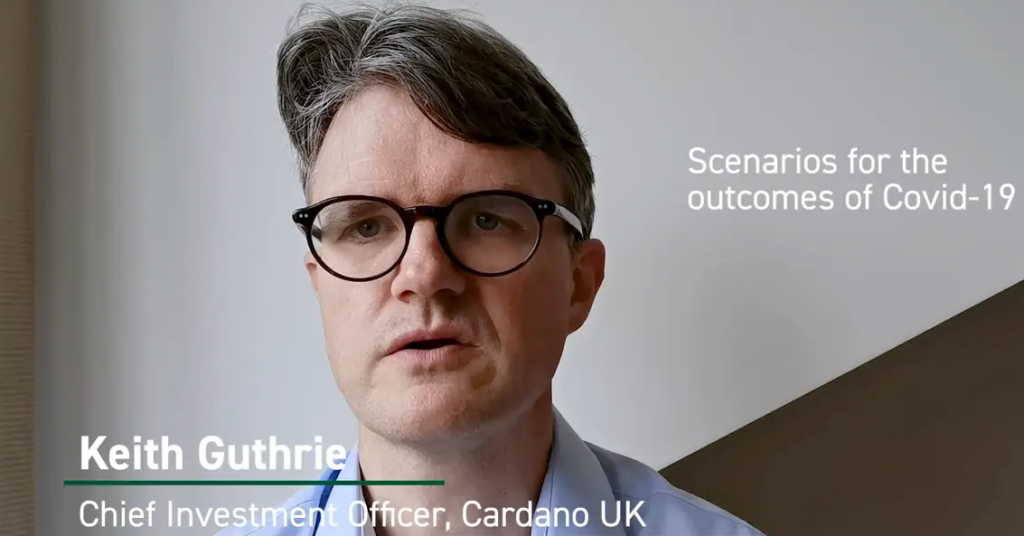 At Cardano one of the most useful tools we use when thinking about portfolio construction is scenario analysis. That’s because we don’t know what the future holds but by trying to draw up several different reasonable scenarios, we can think through the likely economic implications of those different Scenarios. Today the most important driver of our scenarios is how the COVID19 epidemic plays out.

I will start off by stating, we are no experts on medicine or epidemics.  We have spoken to quite a few experts through our network of contacts and have attempted to understand the data. We acknowledge that there is considerable uncertainty in potential outcomes from what I am about to suggest.

To do this Scenario analysis we need to develop a central case for how we think the COVID19 epidemic plays out, and then a more bearish and a more bullish case.

Before I get into the scenarios, I want to say that it can seem very callous talking coldly about statistics and economics when there is a huge human impact and tragedy being caused by this Virus happening each and every day and its happening immediately around us. I want to acknowledge that human tragedy upfront. Things are going to get a lot worse over the coming weeks as the death-toll escalates,and the number of new cases globally is going to look very scary indeed. Its going to affect people we know directly, and that is a very real and scary thing for all of us.

So onto the scenario analysis:

Our central case is that, despite the very scary statistics we are seeing at the moment, the social isolation model being implemented in different countries will be effective and will create a peak in the number of cases, depending on when and how strictly that isolation was implemented.

After that the peak, the number of cases will decline quite substantially and in a few months time our central case is that some of the restrictions in countries that have successfully slowed the cases will ease up. However that will only be a partial easing and a partial return to normal economic activity for a few months, there will still be too much circulation of the virus globally to ease travel and movement restrictions completely.

We may well then face a second wave of increasing cases and new social isolation restrictions later in the year. A vaccine is likely to be invented but is likely to only be in wide scale use in 2021 when it will be possible to return to a more normal social and economic environment.

Let me explain how we arrive at that central scenario

And this is where we see big variation in the approach which I think are important. I would like to contrast two different approaches to managing the Virus:

In this case social measures are put in place to restrict social interaction to slow the pace of spread but they are no where near as strong as the containment approach. There is no strict attempt to isolate every sick person and every person they have been in contact with. While we are in “lock down” it is nowhere near as stringent as the lock down in the Chinese example.

At the moment the UK and much of Europe seems to have implemented most of the Suppression type lockdown strategy. We think its quite likely that over the next 2 to 4 weeks we will see new cases peak in these countries and then start to decrease. Its quite likely that death rates will continue to increase sometime after the peak in new infections.

The US by contrast has been far slower to react in the early phases of this epidemic to implement a proper lockdown.

We don’t think life just goes back to normal in 6 months time. That has crucial economic implications.

After that the key question is how effective a program of testing and monitoring for a new wave of infections is implemented.   My central case probably has a re-emergence of cases later in the year, possibly necessitating renewed lockdown measures at that point.

The key take-away of this case is that this is not a recipe for a quick return to economic normality any time this year.

The negative alternate scenario is that the spread in the US, and perhaps in poorer countries is much worse and continues for longer than our central scenario. Social restrictions are in place for even longer. The economic impact is even more severe.

The positive alternative scenario is things get better and return to normal more quickly. The social distancing really is capable of stopping the disease over the summer months and we don’t face a second wave later in the year. A vaccination program is capable of being rolled out earlier and perhaps we see more normal economic activity by the end of the year.

In conclusion, our central case is for a very strong lockdown of economic activity over the next few months which we are already experiencing, followed by only a partial return to normality in the terms of social interactions and economic activity middle of the year and then a possible resurgence of the virus and further lockdowns later in the year.